The show is an outcome of the curious clash of two different artistic practices and approaches which found their common ground during a residency in Bern (www.residency.ch).

Ustina Yakovleva’s delicate semi-abstract graphics and fabric objects evoke an image of the pre-human organic world. This realm is crossing over into the post-human digital landscape created by German Lavrovksy. Pre and post merge at the meeting point of here and now.

“Large part of my practice is constituted by graphic works which consist of identical individual strokes which grow into abstract forms. It is a kind of automatic writing which binds the time into the material form. Works in other media have the similar principle – embroideries which evolve into forms often unpredictable for me, beads and thread sculptures reminding continents or icebergs, or possibly electronic circuits rooted in empty air. Some projects I develop are figurative and represent imagined or real landscapes, there various techniques allow to reveal the peculiarities and variativeness of the same landscape, depending on objective and subjective factors. I create works without sketches, as I am interested in self-forming composition as part of the creation process; drawing develops as a living organism, taking new forms throughout the work. Individual elements construct larger structures, like the atoms and cells construct the objects around us” (Ustina Yakovleva).

Artistic practices of German Lavrovsky refer to philosophical speculations that emerge as regard to boundaries of anthropocentric picture of the world. Gender, physicality, sexuality undergo repeated diffusion and reconstruction in ephemeral digital space of his works. Finding specific plasticity and non-permanence, the characters of German’s works reflect insights about possible models for new identities. Subjectivity is burst forth from an individual and is distributed between threads and connections, in which desires, machine codes, neural networks, body parts, polygons and algorithms, visual effects and fragments of human memory participate. An important conceptual element of German’s art is work with conception of surface. Every thing is a tool for broadcasting and transmitting data. The surface does not hide anything, but on the contrary – this is the place where interpenetrations and connections occur. A vivid example of such logic is the image of the body-screen, which is often found in the works of German. 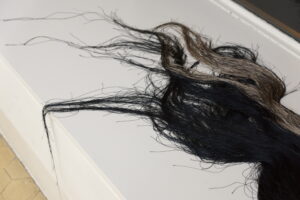 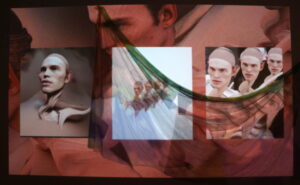 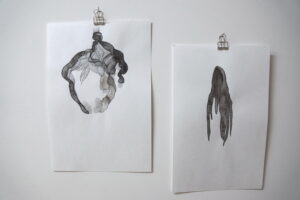